2017 IEEE ICMA was held in Takamatsu, Japan from August 6th to 9th. 2017 IEEE ICMA funded by the American Institute of Electrical and Electronic Engineers and the National Natural Science Foundation of China. And it was hosted by Kagawa University and Beijing Institute of Technology. The conference is a world famous conference on mechatronics and automation. It has significant influence in the field of international robot and automation. 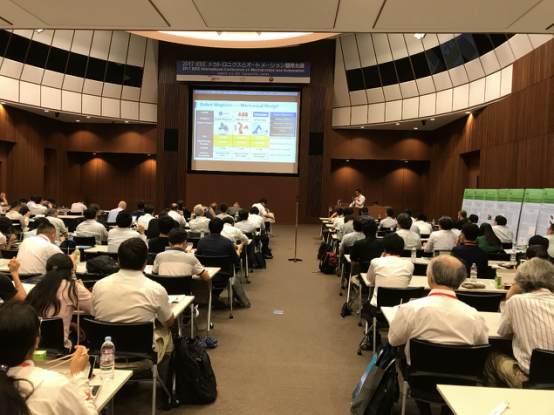 DOBOT was invited to the meeting, and CEO Jerry Liu made a report on the DOBOT Magician at the meeting. The report mainly introduced the following aspects of Magician: 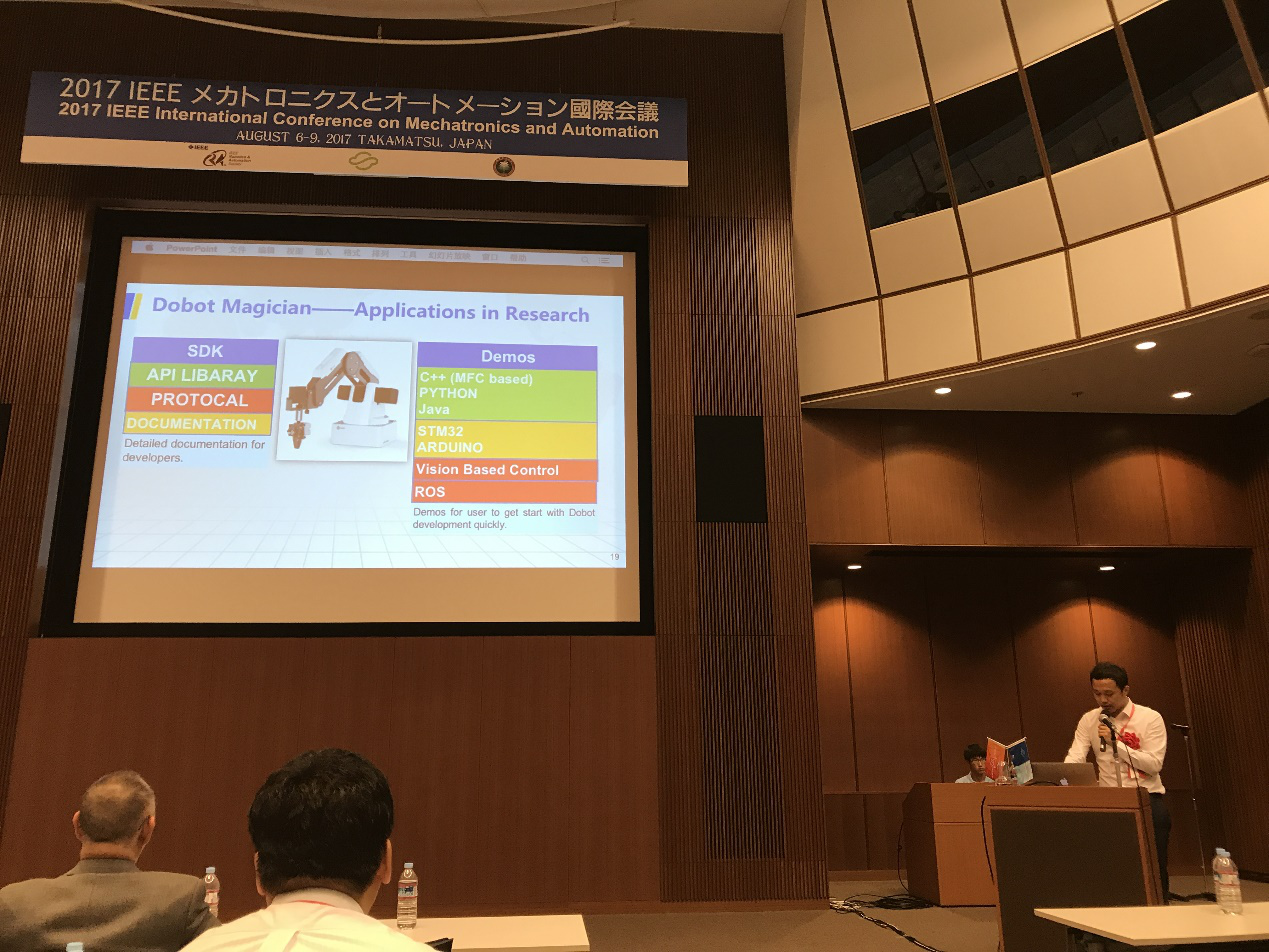 From industrial computers to home desktops, to laptops which can be carried around, it took about 30 years. However, the development of the robot arm has been going on for a long time. The robotic arm was born in the 60s of the last century. Then it has been working on the repetitive work of Heavy Industries. If you want the robot arm to spread to daily life like the computer, you must solve the four problems of its application scope, operability, cost and security. DOBOT Magician has made great efforts in these areas.

Compared to the traditional mechanical arm, feeding, welding and other functions. DOBOT Magician can carry out teaching, 3D printing, writing, painting, laser engraving, two developments and other functions. These applications make robots no longer a simple production tool, but can be applied in teaching, entertainment, DIY creation and many other applications. Let more people contact and use the robot arm. 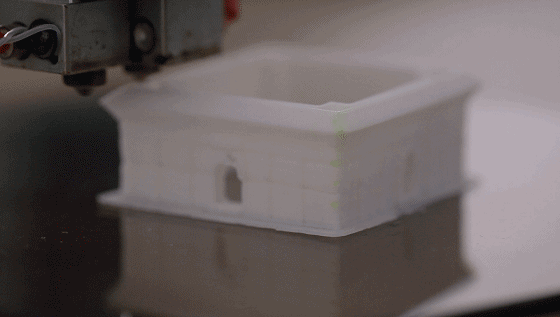 DOBOT Magician through the continuous optimization of iterative design, the use of planetary reducer, customized motor drove and integrated controller design. The price is controlled in such a limiting condition at $1000. 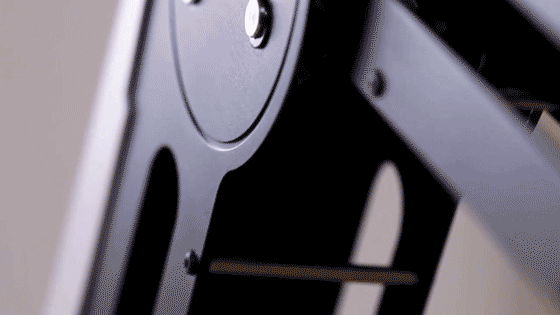 DOBOT Magician is simple to operate without complicated expertise. There are 7 interesting ways of controlling: brain, electricity, body, gesture, language, vision, PC based and APP control software, which reduce the learning cost of robot operation. 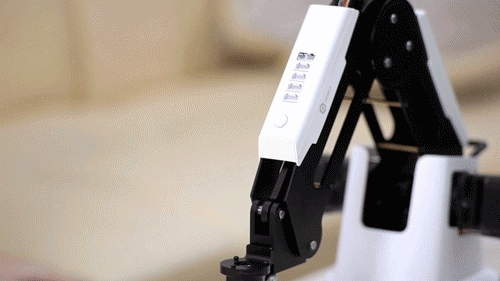 The DOBOT Magician uses a low voltage drive to control the actuators who has small torque and lightweight. In the event of a physical collision, the system can be effectively stopped to avoid damage to the application environment and the robot body, so that it can be safely applied to our working environment. 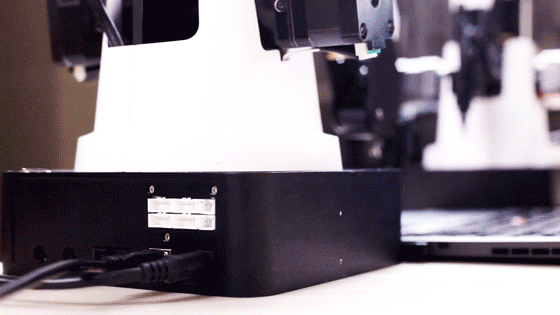 Through the optimization of hardware and structural design, DOBOT Magician broke through the existing design methods and provided the best design, user experience, and control cost within the acceptable range.

Unlike the design of traditional industrial robots, the DOBOT Magician hides all of the connecting rods inside the wrapped enclosure of the robot arm. The highly integrated design does do not see any wires rotating outside the robot arm. The user does not have to connect any of them. Just open the box and you can use it. The simplified design not only reduces costs, but also makes the overall appearance of the robotic arm look neat and elegant. 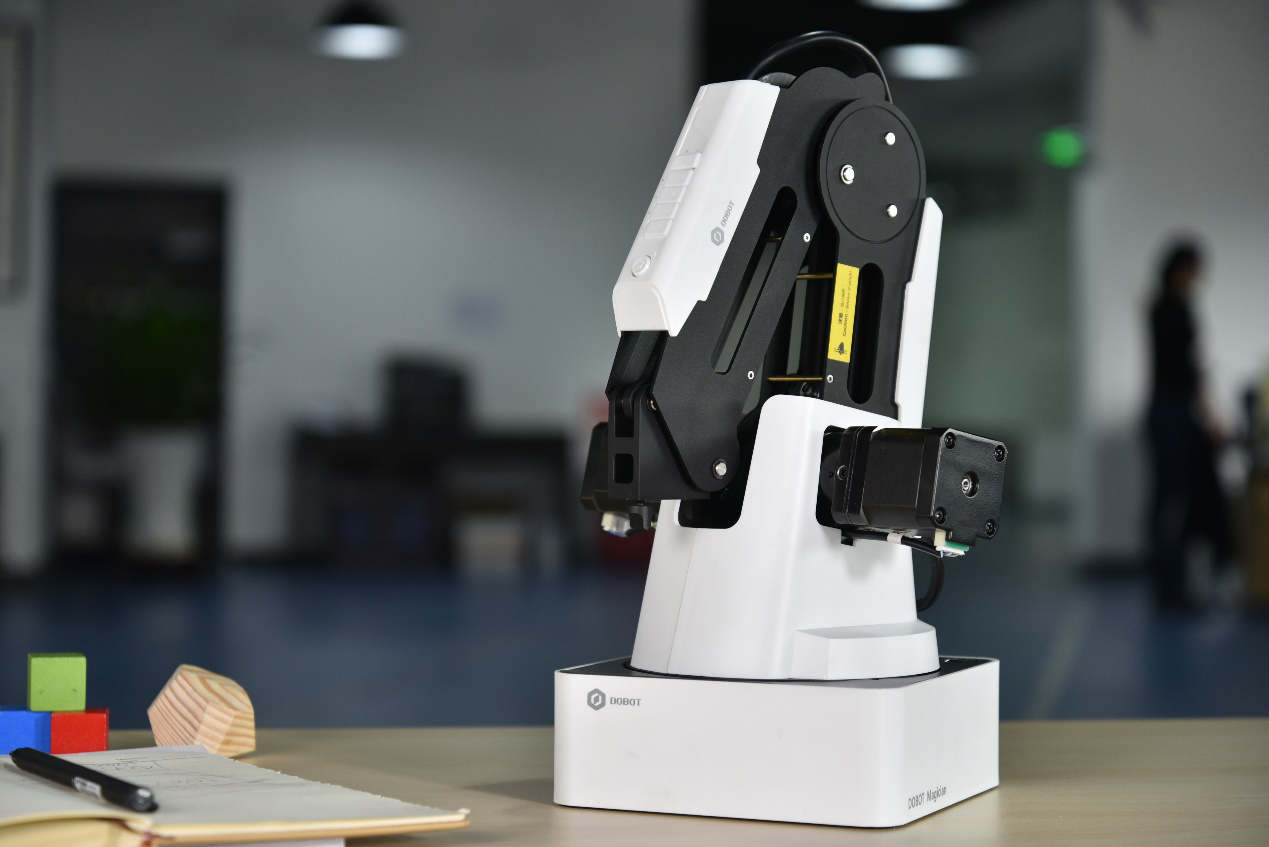 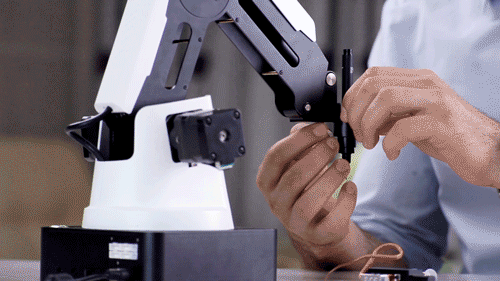 In hardware design, a professional dual core system forms the basis for the implementation of excellent algorithms. A STM32 microcontroller is responsible for processing sensor data, trajectory planning, speed planning and other control algorithms, communication instructions, and input and output signals. At the same time, an FPGA is responsible for continuously controlling output pulses as planned. 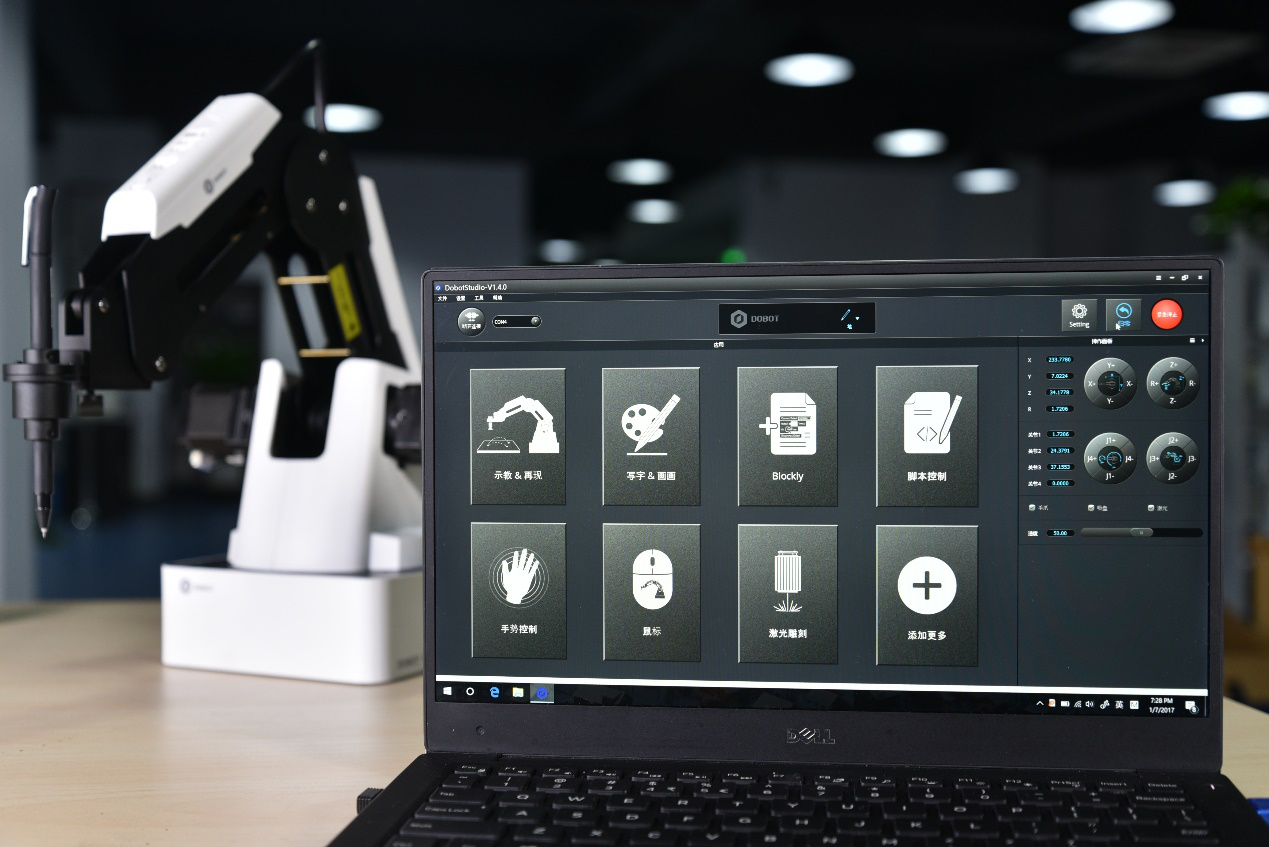 Because of its abundant function and two development performances. DOBOT Magician can be applied to many fields such as education, light industry, commerce and so on. It also has abundant application cases in teaching, scientific research and other fields. 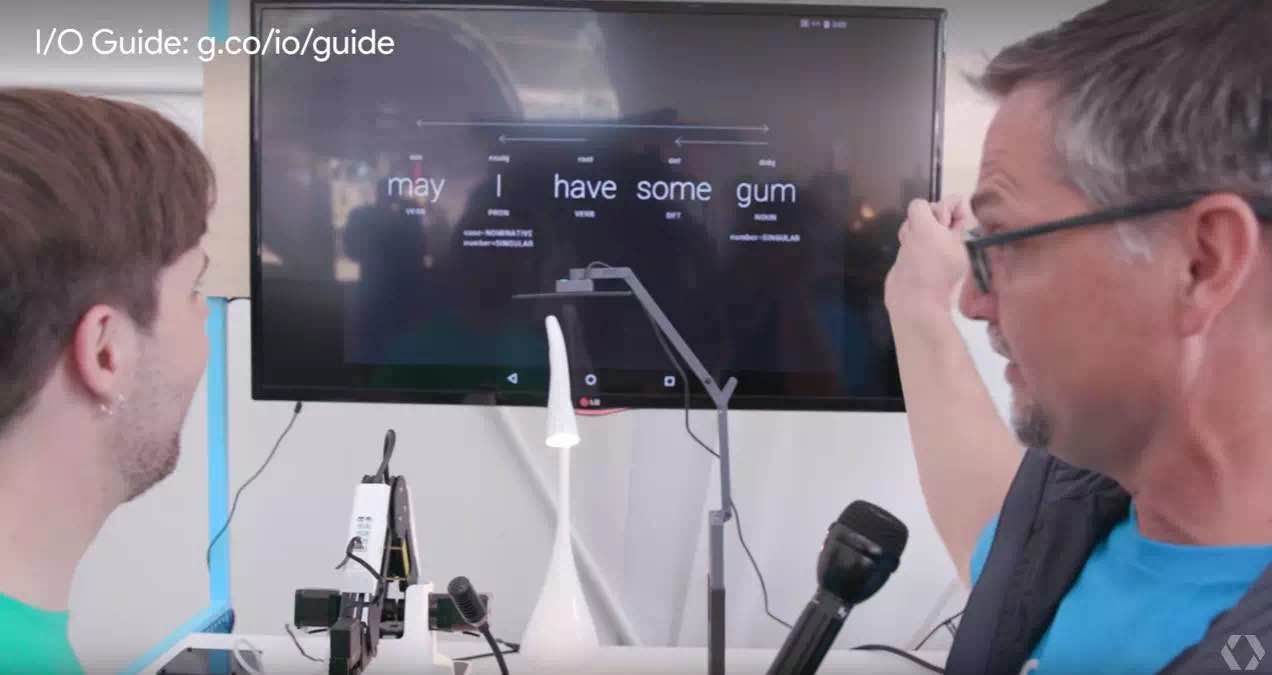 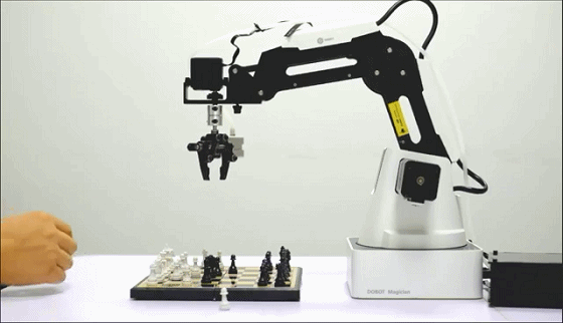 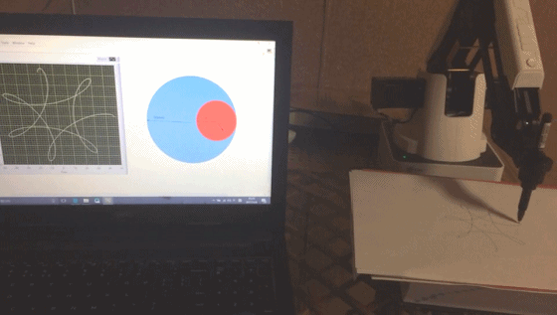 We hope that robots can be as popular as computers one day. They are widely used in every aspect of our lives and become assistants to people's lives. We also hope that more people will be able to join in the development of robots, to promote the development of more intelligent robot arm, and can achieve more applications. 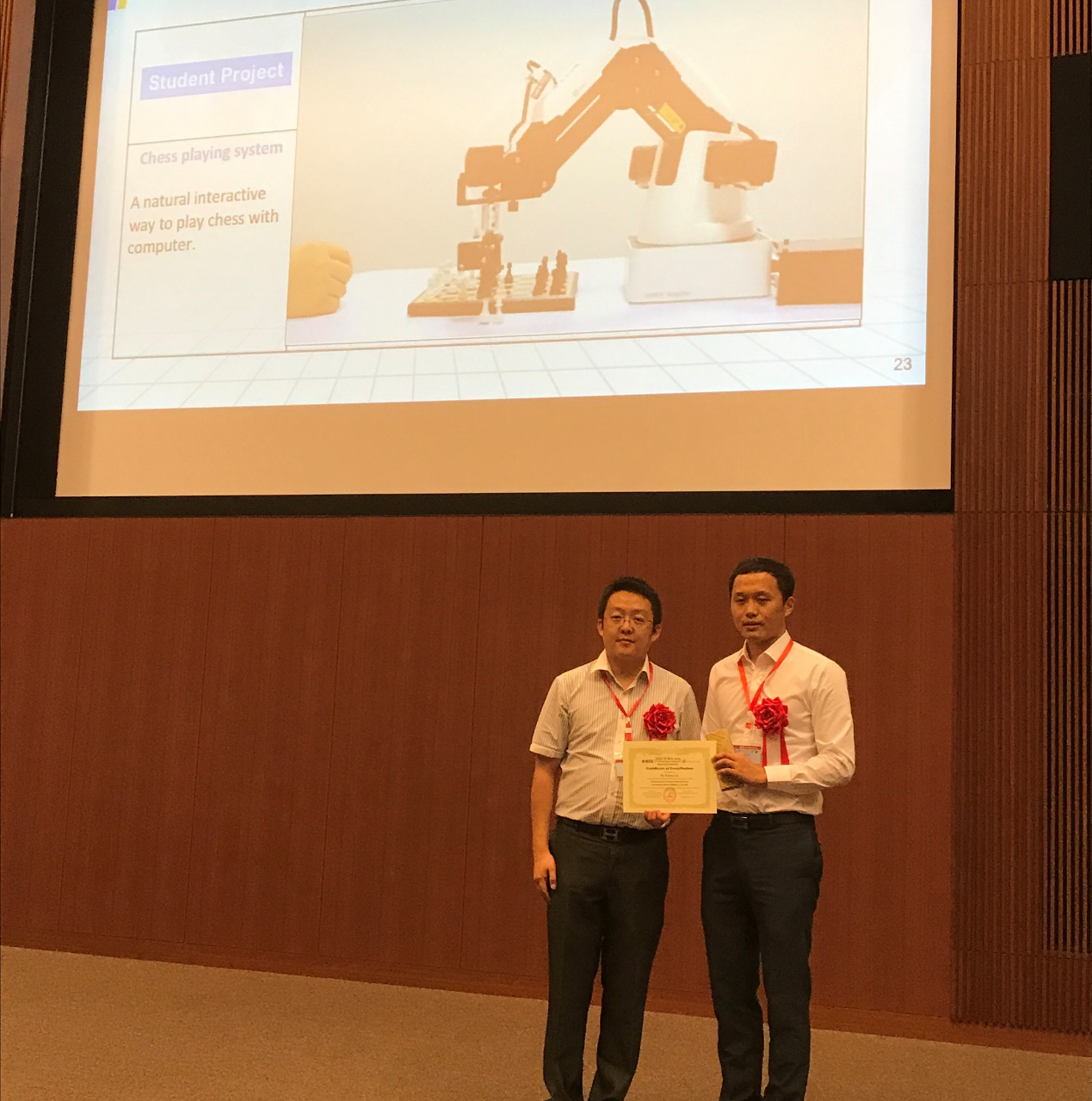 After the speech, experts and Mr. Liu communicated about programming, mechanical automation and other related issues of the intelligent robot industry. Mr. Liu also invited experts to experience the function of DOBOT Magician. In Japan, DOBOT Magician was highly praised and affirmed by experts once again.